The seeds of the International Brotherhood of Electrical Workers were planted at an electrical exposition in St. Louis, Missouri in 1890, when American Federation of Labor (AFL) organizer Charles Cassel granted a charter to a group of “Wiremen” and “Linemen” who were seeking a better way of life for electrical workers everywhere.

Ten delegates representing 286 members held the first Electrical Workers Convention in St. Louis on November 28, 1891. The names of those ten men to whom our Brotherhood owe its very existence are Henry Miller, J. T. Kelly, W. Hedden, C. J. Sutter, M. Dorsey, T. J. Finnell, E. Hartung, F. Heizleman, Joseph Berlowitz, and H. Fisher. These ten Brothers who founded our Union met in a small room above Stolley’s Dance Hall in a poor section of St. Louis. It was a very humbling beginning, however, it was where the roots of the IBEW were nurtured. These delegates adopted the name, National Brotherhood of Electrical Workers (NBEW) and elected Henry Miller as the first Grand President and J. T. Kelly as Grand Secretary-Treasurer.

They worked day and night for seven days to draw up what are basically today’s I.B.E.W. Constitution, general laws, ritual and the IBEW Emblem of a fist grasping bolts of lightning.

A month after the founding of the Union, Henry Miller traveled to the AFL Convention in Birmingham, Alabama seeking a charter for the NBEW as an AFL affiliate.

The Charter was granted on December 7, 1891 giving the NBEW jurisdiction over electrical workers in every branch of the Industry. Henry Miller and the other Union Officers spent their own time and money in organizing electrical workers throughout the United States and Canada. At the sixth Convention on October 19, 1899 in Pittsburgh, Pennsylvania jurisdiction was extended to cover the Dominion of Canada and the Union’s name was appropriately renamed the International Brotherhood of Electrical Workers.

With the end of the nineteenth Century at hand and unemployment reaching new highs twenty seven members of Local Union #44 an outside branch of the National Brotherhood of Electrical Workers figured their best interest could be served by petitioning the NBEW to form an inside wiremens Local Union. A short time later the request was granted and on November 15, 1899 a charter was issued to Local Union #86 and the rest is our “History”. 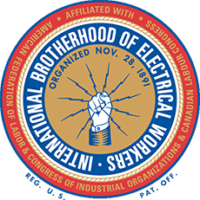 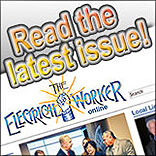